ServiceNow provides several workflow solutions (ITSM, PPM, Security Response, ITOM, etc). Instead of defining a single use case for an integration that satisfies some use cases, this guide reviews the various building blocks available to create integrations through a generic webhook stage or a custom webhook stage.

Consuming Webhooks in ServiceNow requires some configuration. You can read more about the process in the ServiceNow docs.

Potential uses for creating a change request in ServiceNow include:

In ServiceNow, you need to create a Scripted Web Service. At a high level, this service performs the following actions:

A very similar approach could be taken to create a different type of ticket.

To create the Scripted Web Service, perform the following task:

The following is an example script you can use when configuring ServiceNow:

Keep in mind that this only works if the webhook sends the proper data.

In the example script, the response object is the JSON payload from the webhook. Whenever you see ‘gs.info()’, it is how you can write to the ServiceNow System Log. Use this as a debug tool as it allows you to write to the log the values found in the payload. The example script expects at least two key-pair values in the JSON payload, one key being application and the other description. In this example, the value for the application key is being set to the Short Description of the Change. The value associated with the description key goes in the Description field.

ServiceNow also has a REST API. You can use ServiceNow’s REST API Explorer to view sample code for any REST API call, including creating a change request.

While most people are familiar with ServiceNow as a ‘ticketing system’, it also has an automation engine. RunBooks for this engine are created as workflows. These workflows can automate internal ServiceNow operations (like handling approval routing) as well as calling other systems APIs (called Orchestrations), like provisioning VMs on-premise or in the cloud.

These workflows can be called from a ServiceNow script in a Scripted REST API.

Setting Up the Webhook Stage in Spinnaker

The next step is to either create a generic webhook stage or a custom stage.

To create a custom stage, perform the following steps:

Other Spinnaker users can use the ServiceNow stage you created.

The following screenshot shows a Change Request in ServiceNow created by the custom webhook stage:

Triggering a pipeline based on webhooks

Another use case is to trigger a pipeline when a ticket gets approved. For many users, a deployment into production cannot happen unless there is an approval in ServiceNow.

At it’s simplest implementation, an approval can trigger a pipeline execution. A more complex implementation could take fields from the ticket being approved and passed them to the pipeline as parameters to guide the deployment.

The following screenshot shows a pipeline with that gets triggered based on a webhook:

You can add payload constraints to avoid webhooks without the right payload from being processed. Armory recommends testing the webhook without contraints first.

On the ServiceNow side, you need something to call this URL. In the example environment, there is a button on the Change Request form in ServiceNow that calls the URL.

The first step is to define the REST call you need to make. To do this, type ‘REST’ on the navigation filter box and, from the results, select System Web Services > Outbound > REST Message: 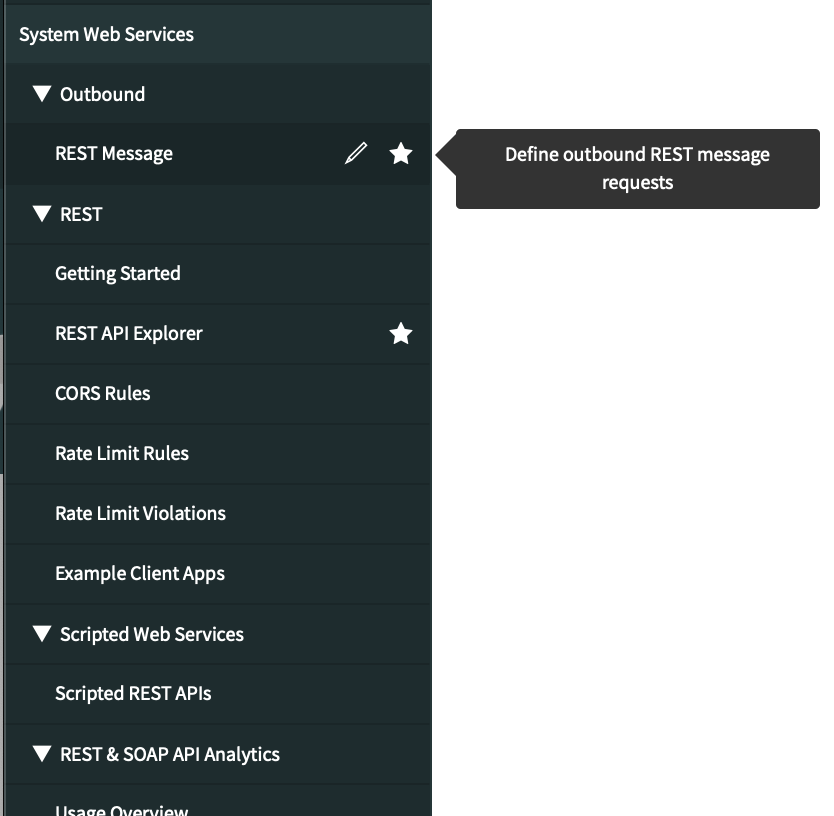 Note: On the menu shown above, select REST API Explorer to get code samples on how to use the ServiceNow REST API to create, search, or edit objects in ServiceNow.

In the REST Messages window, create a new REST Message. The following image shows an example to trigger the pipeline. 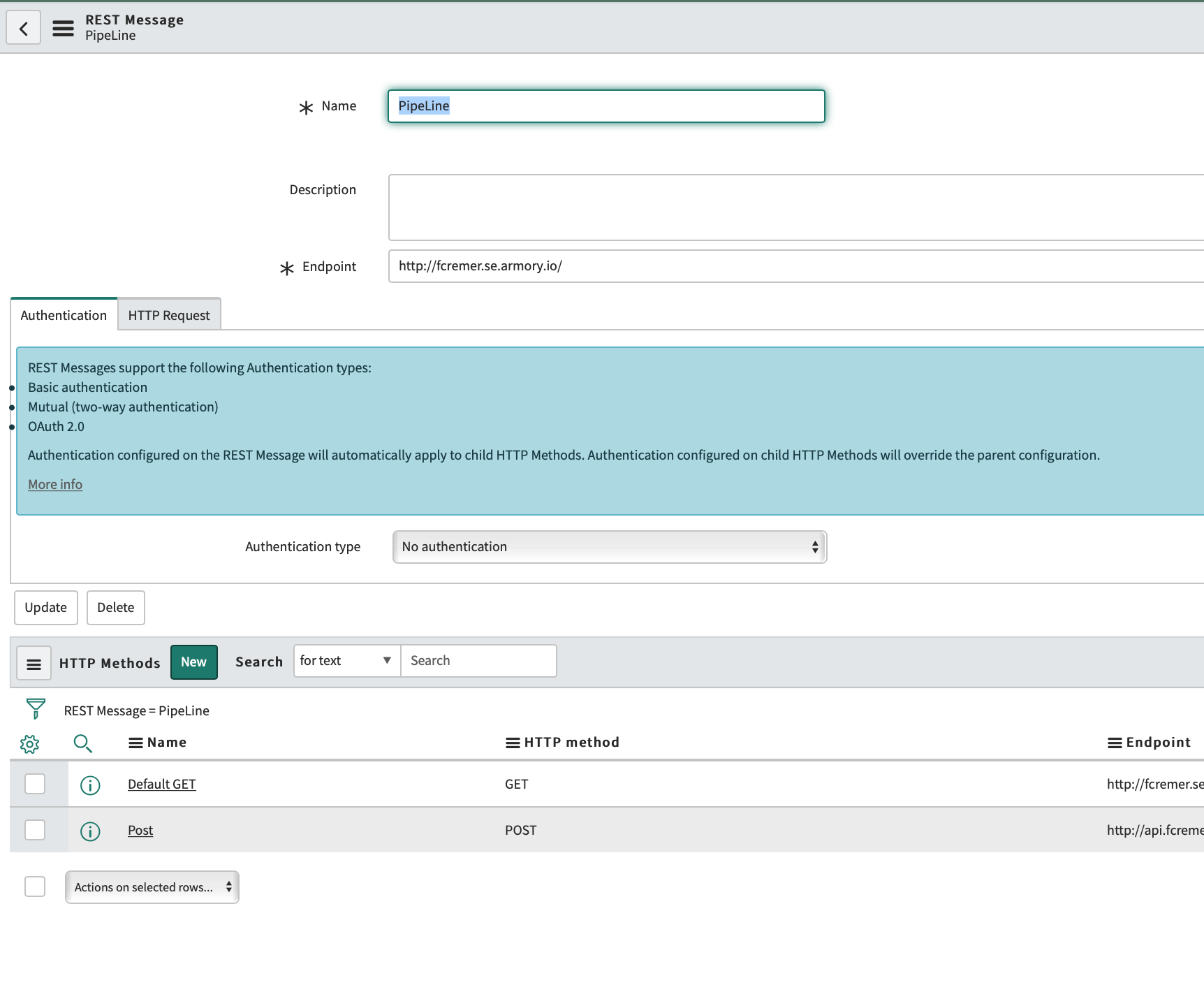 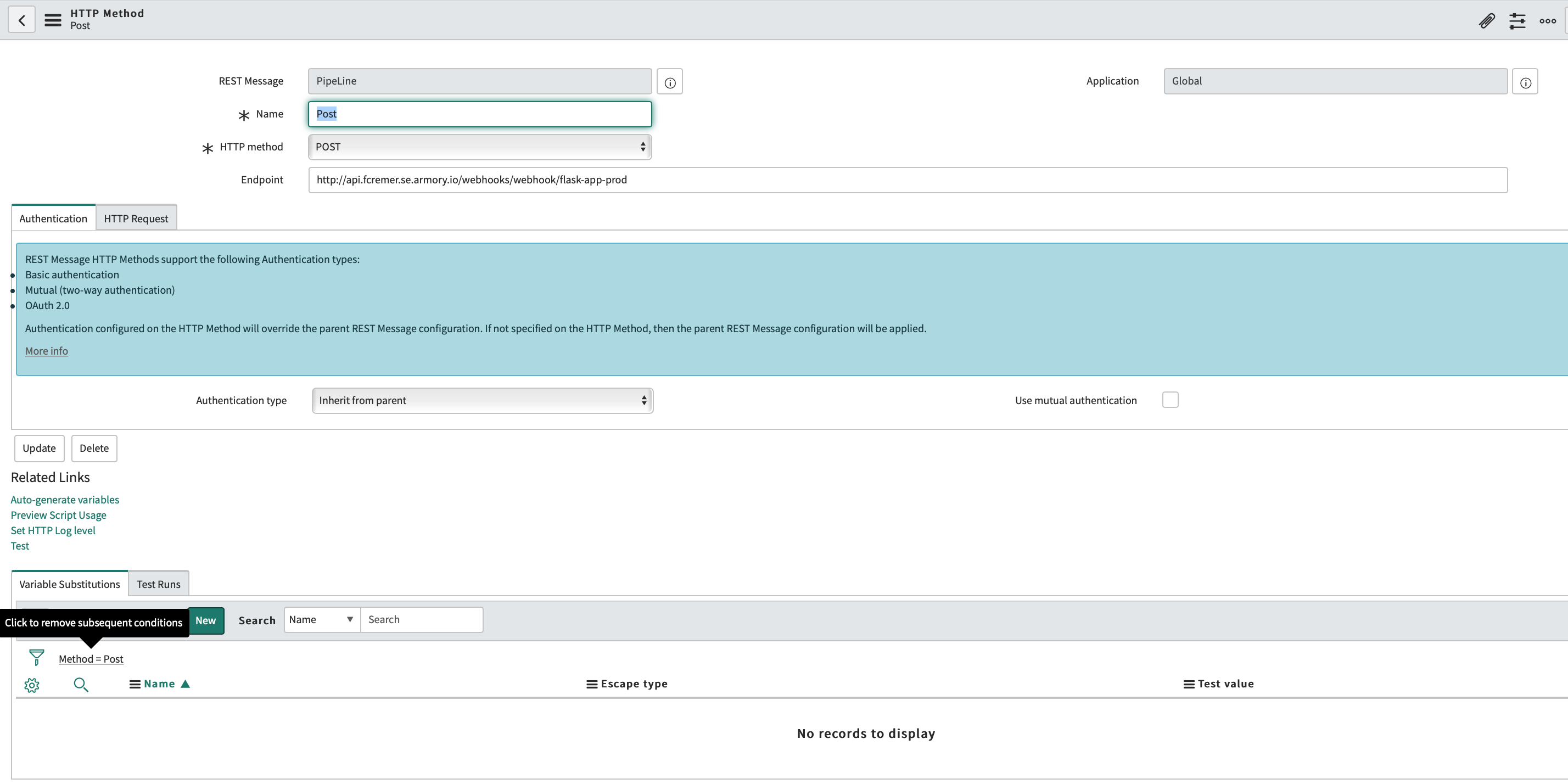 Once you have the REST Message set up, configure something to call it. Examples include when a ticket transitions as a step in a workflow or orchestration or a button or link on a form. This example uses a button in the form. Type “change” in the navigation filter as shown in the following image: 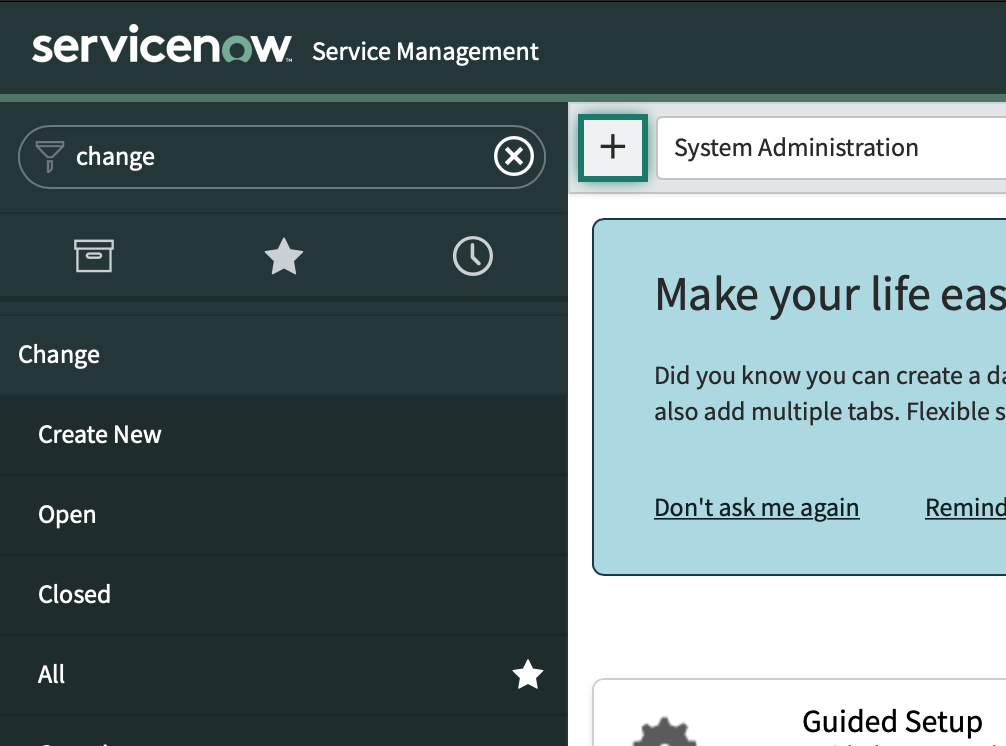 Click on Change > Open to get a list of all open Change Requests. Open any of Change Request from the list and right click on the top of the form as shown below to select Configure > UI Actions: 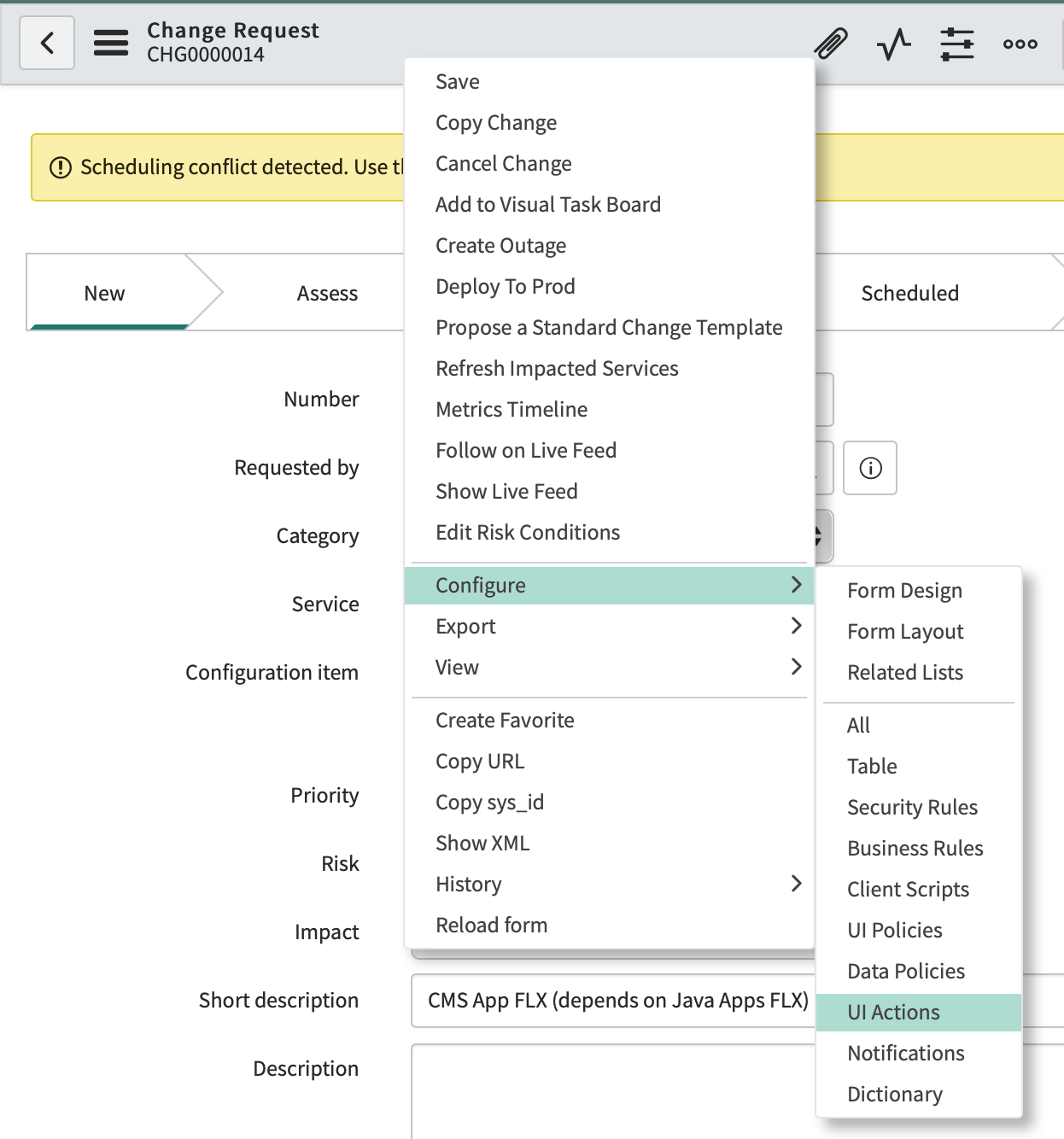 The following screenshot shows how a UI action can be configured: 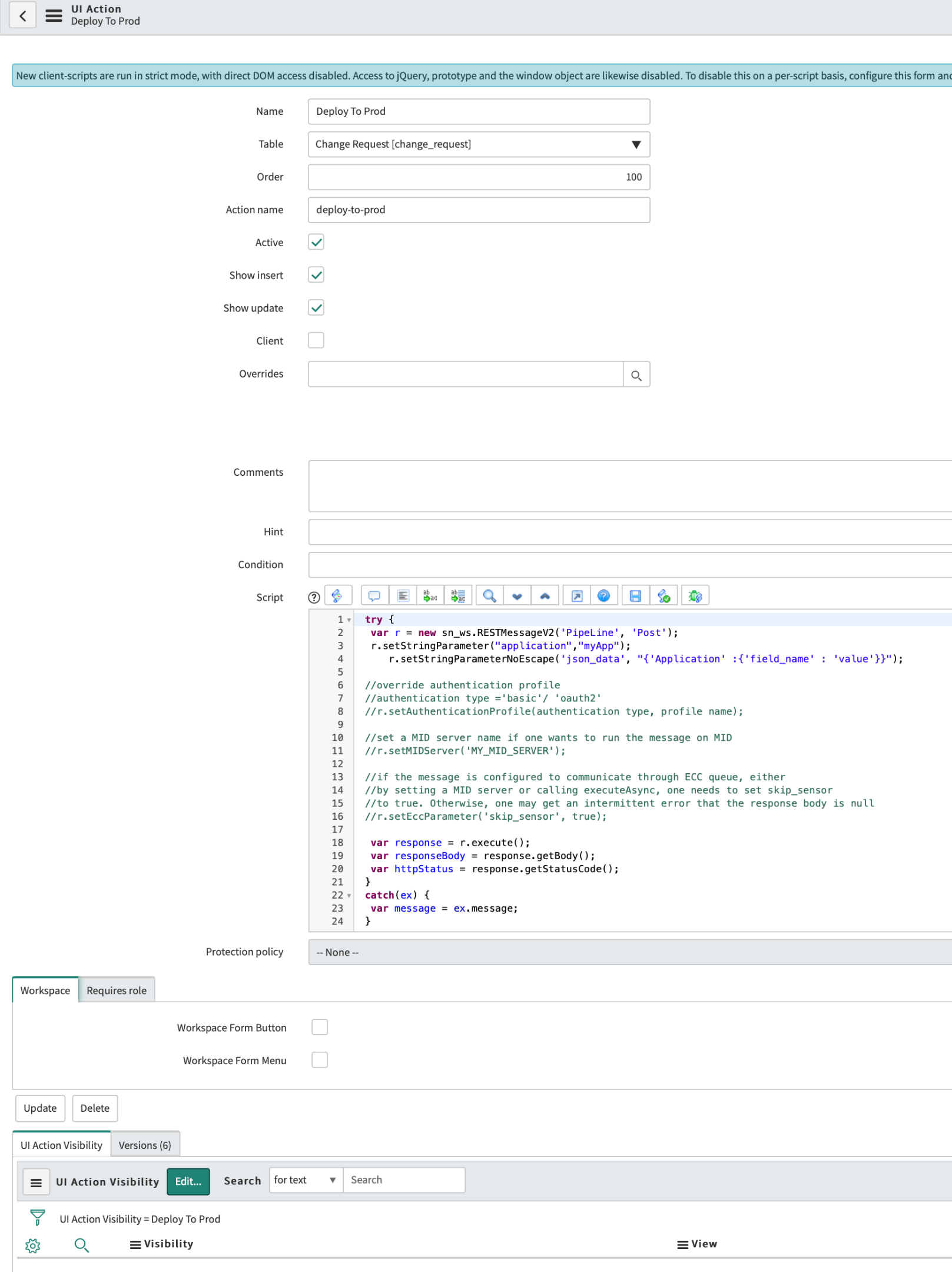 Note that you can use the Condition field to determine under which conditions the button should be active, such as when the status is “Ready for Approval”).