Learn how to add policies to your Open Policy Agent (OPA) server for Armory Continuous Deployment or open source Spinnaker to use when performing validations to ensure your pipelines and users follow policy requirements. This page includes information about what goes into a policy and some basic policies for you to try. There are examples for save time validation, runtime validation, and entitlements.

The following steps walk you through the two-step process with a basic save time validation that applies to all pipelines in your instance when they are saved.

Generally, the only requirement for the Policy Engine in Rego syntax is the following:

Blocks of rules must be in a denial statement (or allow for some packages) and there must be a package of some type that corresponds to what action you are trying to write policies against. For more information about what goes into a policy, see Understanding a policy.

The following OPA policy enforces one requirement on all pipelines:

Add the the policy to a file named manual-judgment.rego.

After you create a policy, you can add it to OPA with an API request or with a ConfigMap. The following examples use a .rego file named manual-judgment.rego.

Armory recommends using ConfigMaps to add OPA policies instead of the API for OPA deployments in Kubernetes.

If you have configured OPA to look for a ConfigMap, you can create the ConfigMap for manual-judgement.rego with this command:

After you create the policy ConfigMap, apply a label to it:

This label corresponds to the label you add in the example manifest. The example ConfigMap creates an OPA server and, by extension, the Policy Engine that only checks ConfigMaps with the correct label. This improves performance.

Replace the endpoint with your OPA endpoint:

Note that you must use the --data-binary flag, not the -d flag.

While simple cases can be validated by the Policy Engine during a pipeline’s configuration, there are a number of cases that can only be addressed at runtime. Pipelines can be dynamic, resolving things like SpEL and Artifacts just in time for them. This means there are external influences on a pipeline that are not known at save time. To solve for this issue, the Policy Engine can validate pipelines when they run but before deployments make it to your cloud provider.

The following example shows a use case where you can use Policy Engine to prevent Kubernetes LoadBalancer Services from being deployed with open SSH ports.

Deployment validation works by mapping an OPA policy package to a Spinnaker deployment task. For example, deploying a Kubernetes Service is done using the Deploy (Manifest) stage, so we’ll write a policy that applies to that task.

For list of packages that you can write policies against, see Policy Engine Packages, and for example policies that use those packages, see Example Policies

Now that the policy has been uploaded to the OPA server, the policy gets enforced on any deployment to Kubernetes without additional input from the end user. Error messages returned by the policy are surfaced in the UI immediately following a halted deployment. 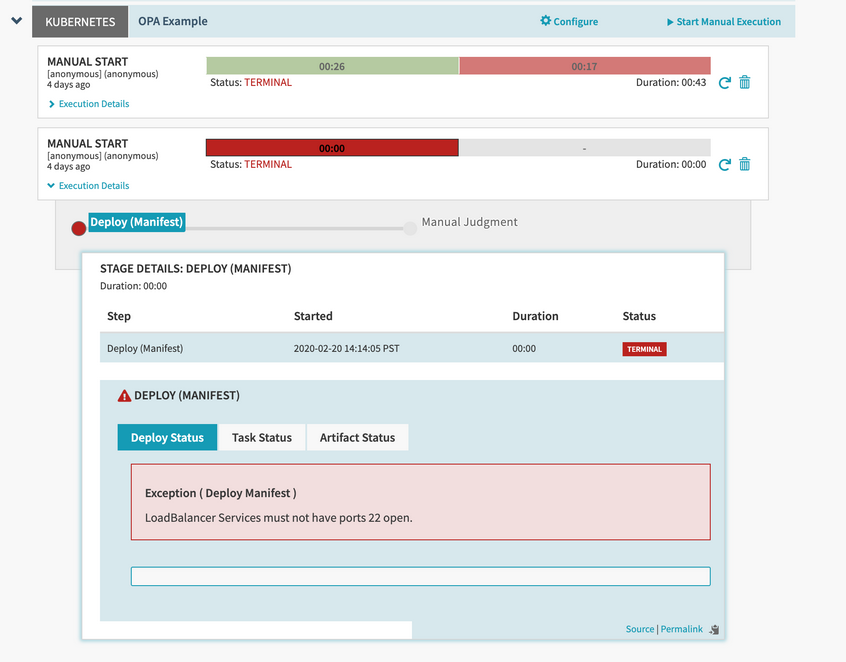 While Spinnaker provides a level of Role Based Access Control (RBAC) out of the box, it is often necessary to inspect and block certain actions within Spinnaker that aren’t necessarily covered by existing features. The Policy Engine is able to intercept all calls to the API and enforce policies to them. Each request for a policy decision includes the acting user, their roles, and admin status.

This policy hook is a different from the other example hooks described. By default, API authorization takes a deny-all stance to policy decisions. In order for an API call to be allowed, it must match an allow rule in the spinnaker.http.authz package. For example, to lock down every action to admins only, you can implement a policy that looks like this:

All requests made to the spinnaker.http.authz package include the following:

These attributes are included in the input sent to policies and can be used to make policy decisions.

The following snippet represents a single POST request to the Tasks API. You can see the relevant information needed when making a policy decision:

API Authorization depends on having access to a user’s identity and role information. Because of this dependency, you must be using Authentication and Authorization, which requires configuring the Fiat service.

The Policy Engine allows you to return a custom message when an action violates a policy and is blocked. For most packages that you want to enforce policies on, this is done by specifying the message as part of the deny block. You can see this in the examples for other policy types on this page.

Returning a custom message works slightly differently for the spinnaker.http.authz package because it is based on the allow rules rather than deny rules.

If a user attempts to perform an action that they are not allowed to, a window appears and displays the custom message you specify.

The following example policy prevents the user milton from taking specific actions in the UI. Specifically, the user cannot use the Edit or Delete buttons on the Clusters tab.

Note the highlighted lines. This is where defining and returning a custom message for the spinnaker.http.authz package differs from other packages.

When the policy prevents an action, the following window appears in the UI and displays the message:

Another common use case is applying a policy to deployments. This prevents any deployments from happening that may violate a policy.

The following example shows the rego syntax for an OPA policy that ensures no Kubernetes Services are deployed or created that expose port 22, the port commonly used for SSH:

Note the deployManifest part of the package, which indicates what tasks this policy should get enforced on.

Policies can be applied to pipeline before and during execution.

Before a pipeline is executed, Policy Engine uses the package spinnaker.execution.pipelines.before to determine if the pipeline execution can even be started. This is can be useful for a variety of use cases.

The following example shows the rego syntax for a policy that requires all pipeline executions include a secret when triggered by a push in GitHub:

Build off this example if you want to create policies that get enforced on all pipelines before they execute.

The other execution hook provided by Policy Engine is more granular. It can enforce policy before and after any stage task is executed. In Spinnaker, every stage is made up of a task. Tasks are the individual steps taken to carry out a stage. You can see the various tasks for a stage in the execution details panel of the UI.

Unlike the deployment hooks, this execution hook can apply policy to any task in a pipeline. Additionally, task policies can use the rest of a pipeline’s execution to make policy decisions. For example, if you want to implement a policy that only allows deployments to Kubernetes after a particular stage has been completed successfully, you can do so using this hook.

The following example shows the rego syntax for a policy that requires a canDeploy type stage to run before a deployManifest type stage:

Verify that policies are evaluated

The Policy Engine requires Armory and the OPA server to be connected. Once you have one or more policies added, you can verify that the policies are being applied and enforced by either performing an action expressly disallowed by a policy or checking the OPA logs. You can check the OPA logs with the following steps:

Pipelines as Code supports using an ignore file for GitHub repos to ignore certain files in a repo that it watches. To use this feature, create a file named .dinghyignore in the root directory of the repo.

You can add specific filenames, file paths, or glob-style paths. For example, the following .dinghyignore file ignores the file named README.md, all the files in the milton directory, and all .pdf files:

When using the API authorization extension, certain API paths are allowed by default. This is because these paths are unauthenticated by default and are required for Spinnaker to operate normally. These paths include:

Any API request to these paths is not subject to authorization requests by the plugin. To add additional paths to this list, add the following to the plugin configuration to your Gate profile in the Operator config:

Note the path key in the preceding configuration. This is required.

Add the following to the plugin configuration to your Gate profile in the Operator config:

You encounter the following error:

This may be due to an incorrect container name for a service in the init container patch. Verify that the patchesStrategicMerge for each service is accurate when configuring Docker image as init container.

The Armory (or Spinnaker) UI fails to load after you enable Policy Engine. This may be due to an SSL exception.

Open your browser’s console and see if there are SSL exceptions. If there are, check what the baseUrl value for the OPA server is in your operator config. Specifically, using HTTPS for an HTTP server can cause SSL exceptions.