Learn how to use HashiCorp Vault to store Spinnaker secrets.

Several tools have been built to address this issue. In this document, we’re going to focus on how one might use HashiCorp Vault to act as our secrets management utility, and then set up our application and clusters to pull secrets from there.

In this guide, we’ll be using Vault as our example secrets manager, but a similar pattern should be applicable to similar tools, such as Amazon Secrets Manager.

This guide presumes you’ve already installed and configured Vault; if you are using Vault and have not done so, check Vault’s Getting Started guide.

Armory recommends that you do not pass secrets through Spinnaker in plain text as this is not safe from a security standpoint. If your Spinnaker deployment gets breached and secrets were passed through it, intruders now have all applications secrets that were passed.

For Vault, refer to the following resources about injecting application secrets securely into Kubernetes pods:

The basic plan here is to allow developers to write code that references “secrets” but which aren’t checked into the codebase. Often this will be via a configuration file, or environment variables. For testing purposes, this data may be changed out; developers may have their own personal set of “secrets” for their development environment. The code just relies on the file or env vars being set properly.

An operations person (or team) is then responsible for the actual production systems, including the passwords used. It’s their job to maintain those secrets and make sure they are set correctly in the production environment.

The plan, then, is to use a Kubernetes secret (which the developers should not have access to) to store the Vault auth token (managed solely by an Operations person). The app can use the auth token to retrieve the application secrets from Vault at runtime. Spinnaker acts as a limited-use interface such that the developer can kick off deployments to production, but may not have actual direct access to the credentials for production.

The following diagram attempts to outline this design, showing the barrier between the developer and the actual secrets their code uses: 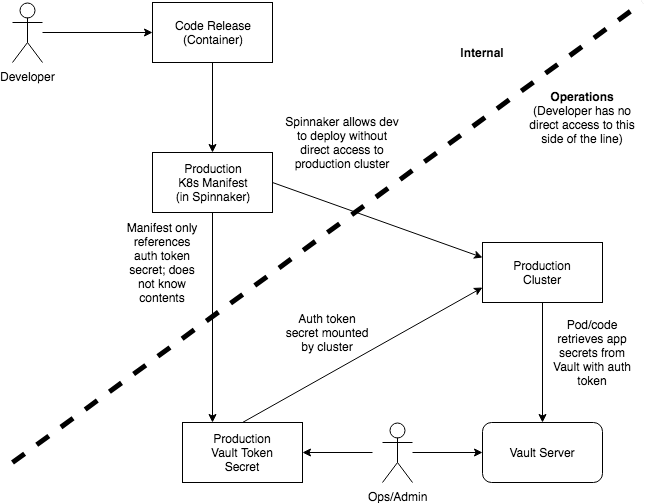 NOTE: Vault (and other tools) have taken this security a step further by connecting the secrets service with the backend systems such that the actual password being used is cycled automatically and is never actually known to any specific person. If your environment permits this setup, it’s definitely a more secure mechanism of password management, but it’s also a much more complicated topic, and may not be possible depending on what services you are attempting to secure.

The first step to securing the secrets is to create a policy in Vault, apply the policy to the Vault path(s) that contain the secrets, and create a service account that is associated with that policy to access it. The authorization token for this account is what we’ll push into the deployed pods via a Kubernetes Secret, and will allow that pod to request the current secrets from Vault.

Set up a secret path

Within Vault, set up your secrets path (such as /secrets or /prod/secrets or whatever works for you). Don’t put any secrets in yet; you’ll want to secure the path first (next step)

Create a policy by name that has access to the path you created. By default, paths are open to anyone authenticated, but as soon as you add a policy to the path, it’s locked down to only those accounts with that policy.

You can read more about Vault policies here.

Use vault token create to create a token attached to the policy you just created (reference). Your app, using this token, should then have access to the actual secrets.

You can now put in your production secrets into that “bucket” safely.

Bringing it all together

Now that your ops team has secured your secrets in Vault, and set up the Kubernetes secret, the next step is to have your Kubernetes deployment mount the auth token secret, and then finally, arrange for your app to use Vault to retrieve the actual production secrets.

To make the Vault token available to your application, you’ll need to mount the secret within your manifest. The Kubernetes documentation shows a number of ways in which you can configure your pods to get access to the Kubernetes secrets either as a mounted volume or as an environment variable.

This manifest reference may be visible to developers, but provided developers do not have direct access to the Kubernetes cluster, they won’t be able to retrieve the actual token from the secret; Spinnaker allows the developers to still manage the deployments to production, but not to retrieve the secret itself.

Now your code (or perhaps just a bootup script) can be written/configured to grab the Vault token that was mounted in your Manifest, and, combining that with the Vault paths, can retrieve your secrets safely.

One way to do this is with a Kubernetes init container intended to run the Vault image (which provides the vault command line tool) to log in, retrieve the secrets and write them to disk, where your application can pick them up.

Alternatively, your code may be able to access Vault directly with the access token, storing the secrets retrieved in application memory, where it’s not readily accessible by someone who manages to gain access to the container’s shell. Hashicorp provides documentation on the Vault API

We’ve only scratched the surface of ways in which app secrets can be managed and then merged at deploy time by Spinnaker. We’ve used Vault as an example because it’s being used more and more by our customers, but there are other products (like Amazon Secrets Manager) and, of course, homebrewed solutions.

In all cases, Spinnaker provides a terrific way to give developers the ability to manage their own deployments while still securing production passwords separately.

Here are some other resources that may provide additional insight into how to manage application secrets within your system: