The Armory Scale Agent for Spinnaker and Kubernetes is a lightweight, scalable service that monitors your Kubernetes infrastructure and streams changes back to Spinnaker’s Clouddriver service.

What is the Armory Agent?

The Armory Scale Agent for Spinnaker and Kubernetes consists of a lightweight Agent service that you deploy on Kubernetes and a plugin that you install into Clouddriver.

The Armory Agent is compatible with Armory CD and open source Spinnaker.

Advantages of using the Armory Agent

Check out the installation guide for how to deploy the Armory Agent components in Armory CD and in your Kubernetes infrastructure.

Keep the following pros and cons in mind when deciding if Agent mode fits your use case: 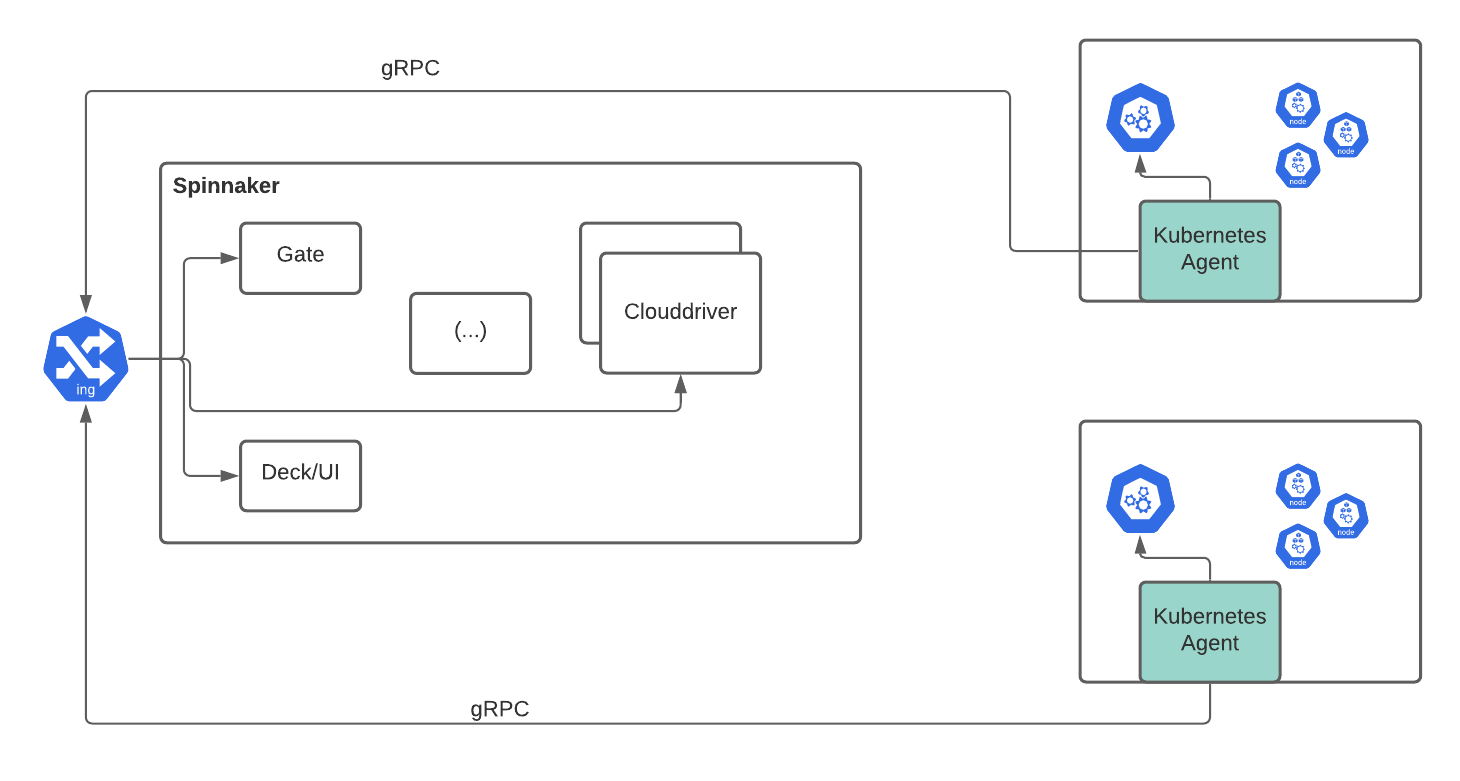 Keep the following pros and cons in mind when deciding if Infrastructure mode fits your use case: 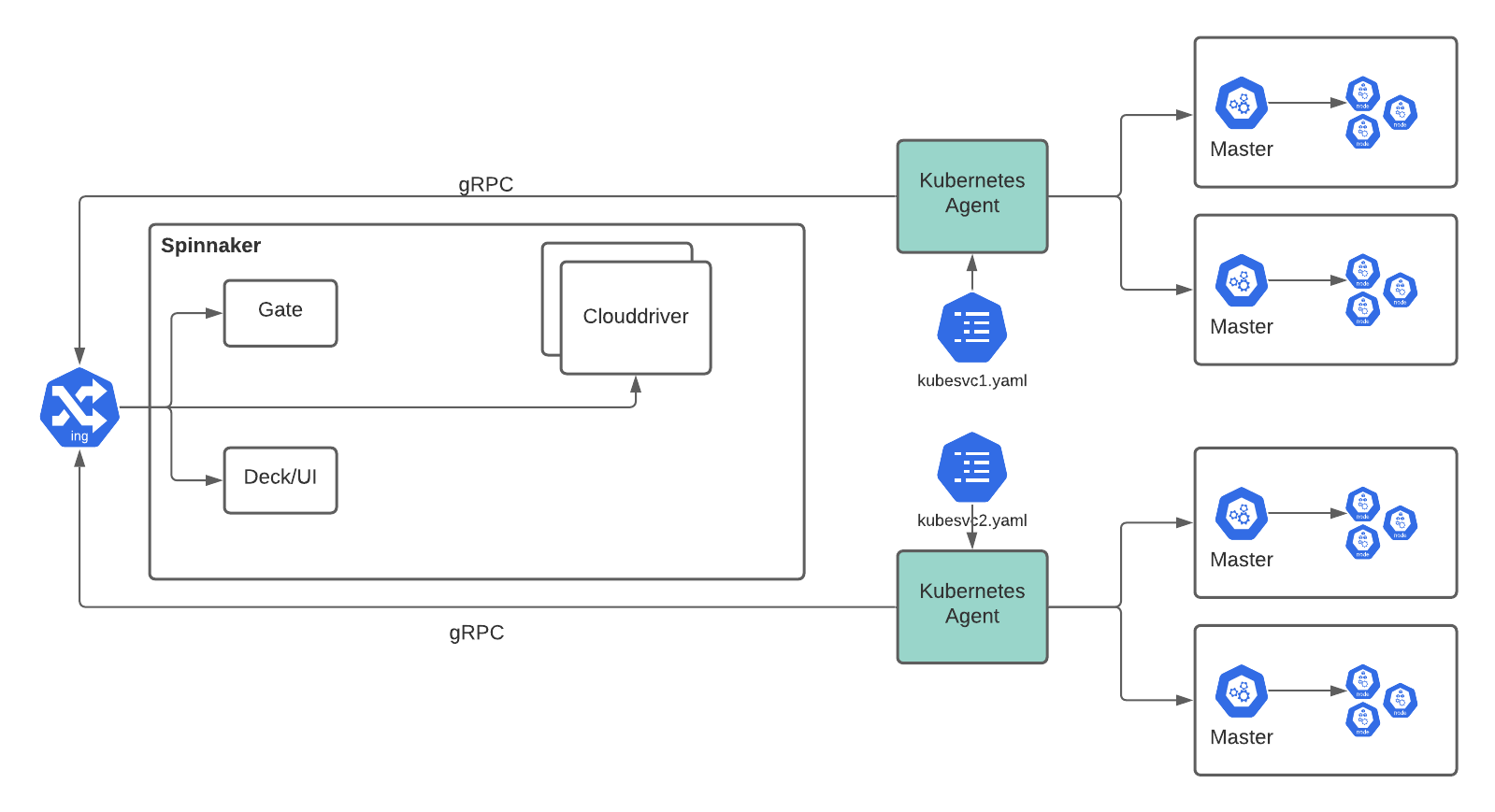 Account name must still be unique across all your infrastructure. Clouddriver will reject new accounts with a name that matches a different cluster.

In this mode, the Armory Agent is installed as a new Spinnaker service (spin-armory-agent) and can be configured like other services.

If you provision clusters automatically, the Armory Agent service can dynamically reload accounts when armory-agent.yaml changes. You could, for example, configure accounts in a ConfigMap mounting to /opt/armory/config/armory-agent-local.yaml. The Agent service reflects ConfigMap changes within seconds after etcd sync.

The Agent service does outbound calls only, except for a local health check, over a single gPRC connection to the Clouddriver plugin. The connection can be over TLS or mTLS. You can terminate TLS:

The Clouddriver plugin uses the bidirectional communication channel to receive changes from Kubernetes accounts as well as send operations to the Armory Agent service.

The Agent service sends the following information about the cluster it is watching to the Clouddriver plugin:

The Agent service always scrubs data from Secret in memory before it is sent and even before that data makes it onto the Armory Agent’s memory heap.

Since the Armory Agent service does outbound calls only, you can have Agent services running on-premises or in public clouds such as AWS, GCP, Azure, Oracle, or Alibaba.

What Armory CD can do in the target cluster is limited by what it is running as:

Communications are secured with TLS and optionally mTLS.

Each Agent can scale to hundreds of Kubernetes clusters. The more types of Kubernetes objects the Armory Agent has to watch, the more memory it uses. Memory usage is bursty. You can control burst with budget. See Agent options) for configuration information.

Scaling the Armory Agent can mean:

You can also mix deployment strategies if you have complex Kubernetes infrastructure and permissions:

Your Clouddriver service must use a MySQL-compatible database. See the Configure Clouddriver to use a SQL Database guide for instructions.

You can find a full list of previous releases in the artifactory.

If you’re familiar with the Kubernetes docs, you may notice that the Armory Scale Agent docs are organized in a similar fashion: