Learn how to use Spinnaker’s Kubernetes V2 provider to deploy your applications.

The Kubernetes V2 provider is centered on delivering and promoting Kubernetes manifests to different Kubernetes environments. These manifests are delivered to Spinnaker using artifacts and applied to the target cluster using kubectl in the background. Currently, there is support to supply artifacts through Git, GCS and Google Pub/Sub. The V2 provider manages the version of the artifacts deployed to Kubernetes by appending a string such as v421 to the resource that was deployed to Kubernetes. This allows for easy rollbacks and management of resources.

There are 4 stages that are available: 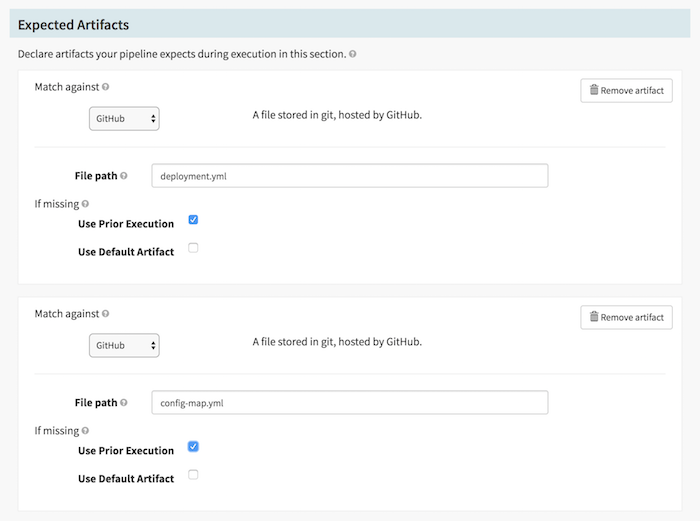 After configuring the artifacts we’ll need to associate them with a Github trigger so the pipeline is triggered whenever there are modifications pushed to Github. For example, the pipeline below will only trigger when either deployment.yml or config-map.yml are modified and pushed to the repository. If the manifest isn’t modified it’ll use the latest version that was deployed.

Note: If you haven’t already, you’ll need to configure Github webhooks for your Spinnaker instance. 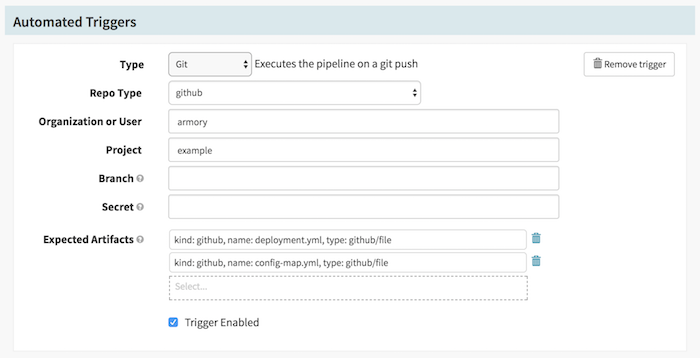 We’ll configure the configMap to be deployed first. Add a Deploy (Manifest) stage to your pipelines. 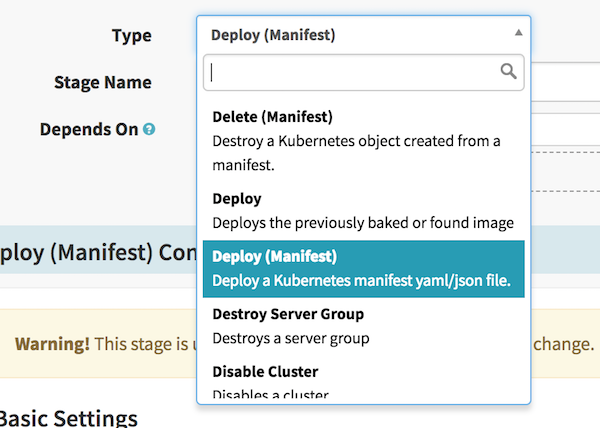 Once you’ve added the stage, select Artifact from the Manifest Source below and it will allow you to choose one of the expected artifacts that we configured in the previous section. Choose config-map.yml and hit save. Spinnaker will deploy the chosen artifact but append a version to the name of the artifact. For our example config map. So for the name k8-v2-config-map it will appear in the Kubernetes cluster with k8-v2-config-map-v001. 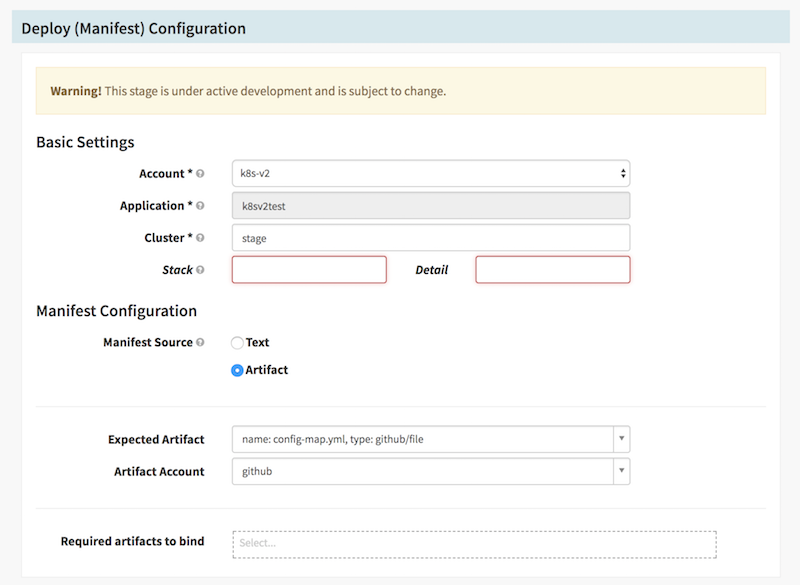 Next we’ll configure a new Deploy (Manifest) stage to deploy the deployment.yml manifest. This manifest references our config-map as a volume and it’s source will be replaced by the versioned artifact deployed in the previous step: k8-v2-config-map-v001. So if our deployment.yml contains the following:

the name will be replaced with the properly versioned artifact: 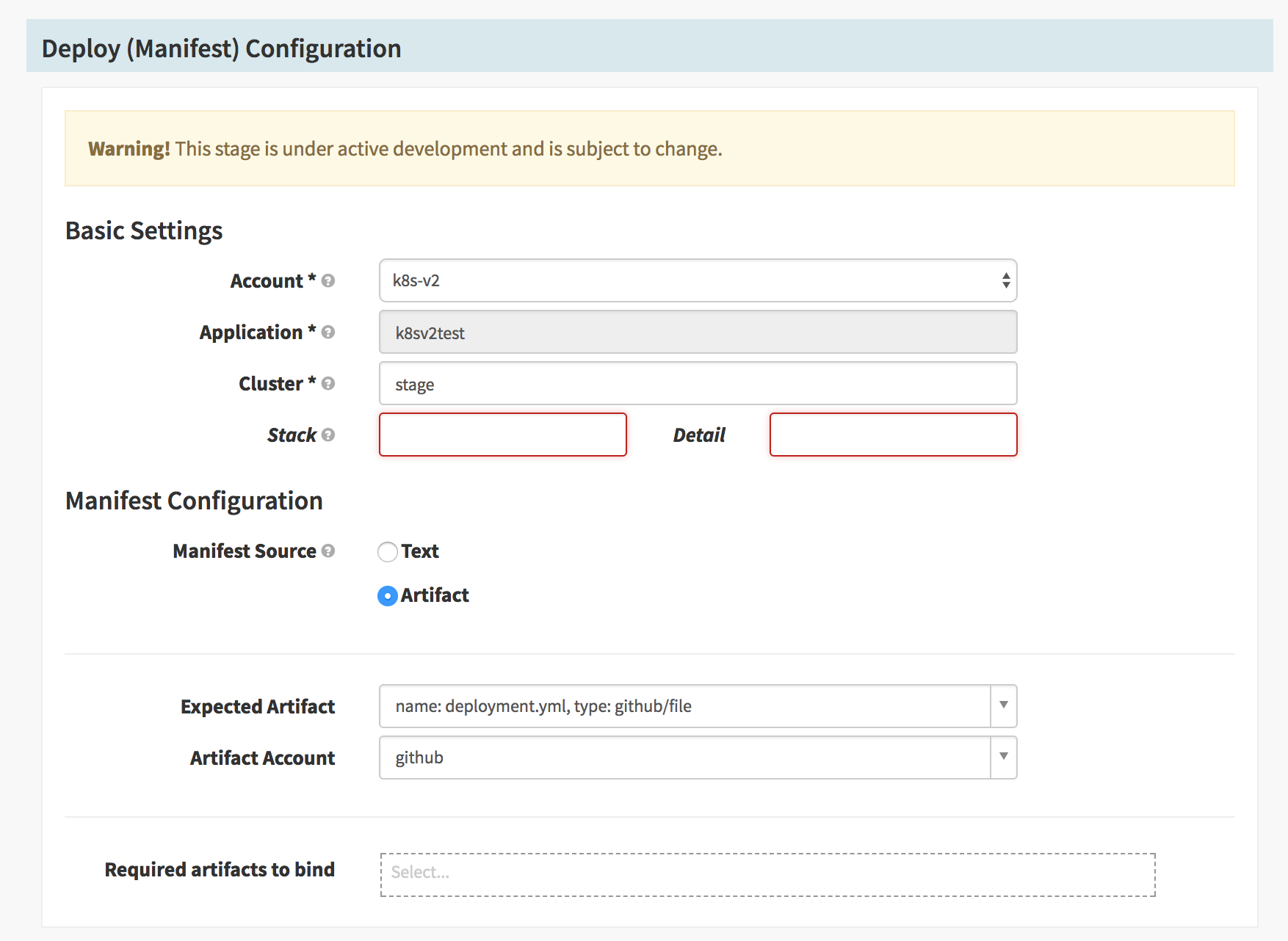 Your final pipeline should look similar to the one below.

In order to execute your pipeline the first time you’ll need to edit both the config-map.yml and deployment.yml, commit the changes to git and push the changes to Github. The pipeline should trigger and execute.